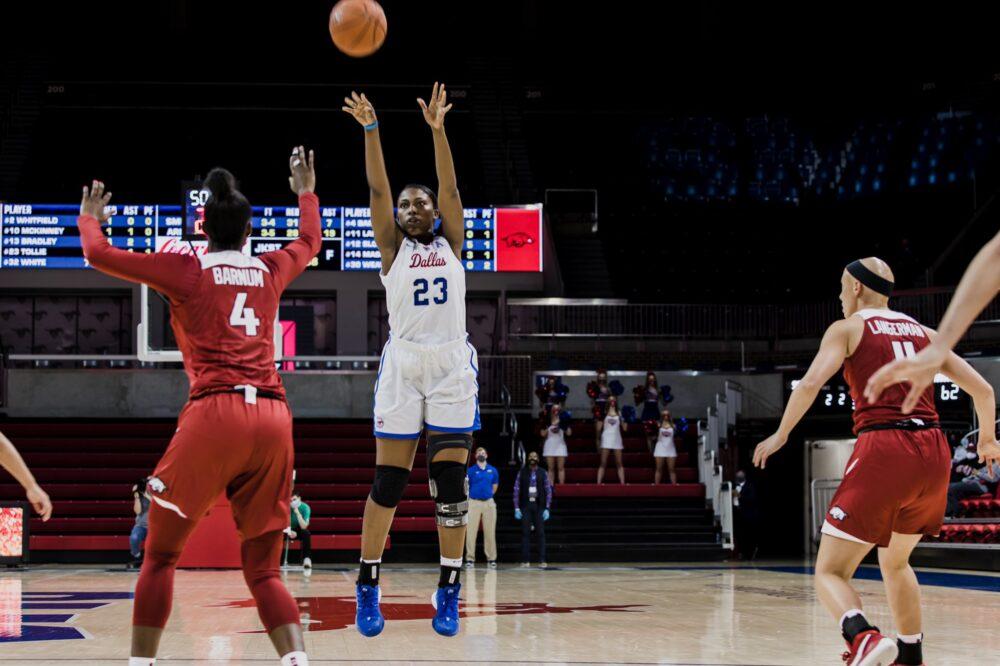 A season-high 16 three-pointers for Arkansas pushed it past SMU 79-47 on Wednesday night. That total set a Moody Coliseum record for most three-pointers in a game by a team, men’s or women’s.

Arkansas, ranked No. 13 in the country, blew the game open in the first quarter hitting seven three-pointers which was equal to the number of points that SMU scored in the opening period. The Razorbacks continued the shooting barrage in the second quarter as 25 of their 29 field goal attempts in the first half were from three-point range.

It was more of the same for Arkansas in the second half as it led by as many as 38 points. SMU tried to keep up with the Razorbacks but were held to their lowest point total of the season.

Amber Ramirez led the charge for Arkansas with 18 points, all of which were from three-pointers. Makayla Daniels had 13 points to go along with seven assists while Chelsea Dungee added 12 points and four steals.

Kayla White led SMU in scoring with 15 points and nine rebounds on the night. Rhyle McKinney poured in 13 points to give her three straight double-digit scoring efforts in her first three starts.

SMU could not seem to find a rhythm on offense shooting just 25.7% from the field. White and McKinney managed some success in the second half but combined to make just 11 of their 33 shots.

“We thought we could win, but we didn’t compete from the tip,” head coach Travis Mays said. “They’re a very high-scoring club, and they showed us exactly why tonight.”

Despite holding Arkansas to its lowest point total of the season, SMU fell victim to the fast-paced offense of the Razorbacks. The Mustangs fared better in the paint than in previous games, but this appeared to leave the team vulnerable on the perimeter.

“That was part of the game plan,” Mays said. “We wanted to take away penetration but close out on the flight of the ball and run them off the three-point line. We didn’t get there in time, and they knocked them down.”

This was the final non-conference game for SMU as they are still looking for their first win of the season. The team has a week off before they begin conference play at home against East Carolina on Dec. 16 at 3 p.m.

“There is a lot that we can take from all four of these games,” Mays said. “The experience is going to help us. When we come back in, I think it’s going to look somewhat like a training camp this next week that we got before we start, so we got to go back to square one and develop an identity which we don’t have right now.”