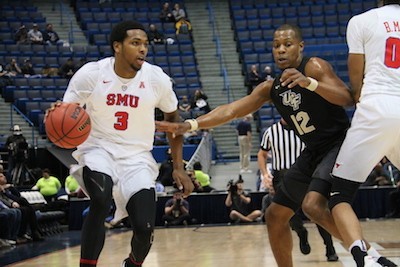 He’s correct. SMU, re-focused after escaping a 22-point East Carolina comeback a day earlier, scored 44 points in the second half to beat UCF 70-59. He also added another brilliant performance to an impressive senior season.

More importantly, he took control in the final 20 minutes, after SMU had just played its third straight half of Semi Ojeleye-dependent offense.

Again, he offered a simple but accurate explanation.

“This is what I live to do, play basketball,” Brown said. “Can’t ask for anything more.”

That was Brown on Saturday. Playing basketball, locked in. It’s not a surprise. It has happened on a near-nightly basis. Saturday, though, he delivered at a needed time.

Needing to help get SMU back to its unpredictable-because-of-many-scorers offense, Brown scored 16 points in the second half. SMU, again, looked like the balanced offensive team it has been much of the season.

Brown sparked a two-possession sequence that began SMU’s separation from UCF in the second half. With 14:06 left, he received a screen from Semi Ojeleye at the elbow, curled around it, caught a pass from Ben Moore, and charged toward the hoop. In his way was 7-foot-6 brick wall Tacko Fall. As Fall came out to contest, Brown kept going, drawing contact as he lofted a short floater.

It fell. He made the ensuing free throw, stretching SMU’s two-point lead to five.

On UCF’s ensuing possession, Fall received the ball right near the basket. Unlike most of the game, SMU wasn’t in position to double-team him. The closest man to Fall was Brown.

Instead of trying to play one-on-one, he reached in and stripped the ball away. Shake Milton picked up the loose ball, and drilled one of his four 3-pointers seven seconds later.

SMU’s five-point lead stretched up to eight, 42-34. It never fell below eight for the rest of the game.

“He played like the tough-minded, highly motivated senior he is,” SMU head coach Tim Jankovich said.

Added fellow senior Ben Moore: “I feel like everybody sounds like a broken record when we talk about SB’s competitive nature, but it’s there. It’s unmatched.”

When SMU met UCF in January, Williams made four 3-pointers in the first half. Saturday, Williams went 1-for-7 from the field, and that one make came with Brown away from him.

“I couldn’t beg Sterling off him today, and I didn’t want to go against a senior that’s begging for that challenge,” Jankovich said.

In Sunday’s championship game, and in any NCAA tournament games beyond that, the spotlight only gets bigger. Brown, or anyone else on SMU, won’t care who gets the attention. SMU’s ideal scenario is to play its usual unselfish way and not create an obvious candidate for attention.

That might be easier said than done, however. SMU is the team that was banned from the postseason a year ago, lost on a controversial call two years ago and was surprisingly not selected three years ago.

SMU may not seek the attention those storylines create. But as Brown and his teammates try to add a conference tournament title against Cincinnati, they’re not forgotten either.

“It would mean a lot, especially with all the trials we’ve had last year and in years past,” Brown said. “Especially with this group of guys right now. It’s a great group. After this, we have bigger goals. We just have to keep doing what we do.”