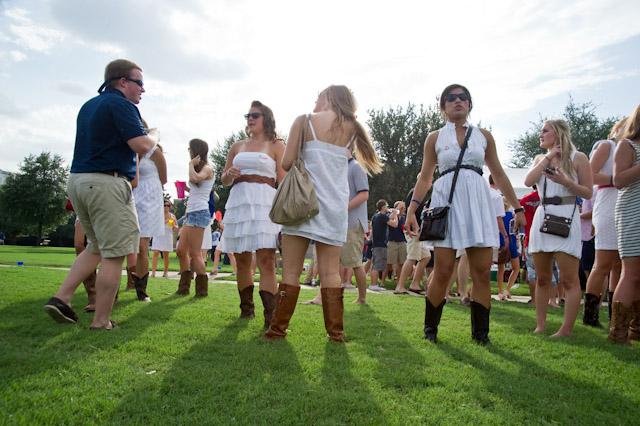 Bring on the red and blue masses, the cowboy boots, the country tunes, the glorious white tents, and the celebratory drinks – these boots were made for Boulevarding. (Rebecca Hanna/The Daily Campus)

It’s the first football home game of the season on Saturday.

There is much anticipation to become a part of the roaring crows in Ford Stadium at kick off. However, the true rowdiness starts somewhere outside the stadium ­— the Boulevard.

“The Boulevard is the social event of the weekend and the semester,” junior Victoria Petersen said. “It’s a place to go, hang out with your friends and get crazy before a football game.”

The first official SMU Boulevard took place on Sept. 2, 2000 when Ford Stadium hosted its first football game against the University of Kansas.

The grand opening of the new facility featured: cheerleading, a procession of the band and hundreds of SMU fans and students gathering at the Boulevard.

The tradition is still vivaciously carried on today as thousands of students, alumni, fans and family from across the country come to part take in one of SMU’s greatest traditions.

The festivities begin around four hours before kick off and takes place on SMU Boulevard and in front of Dallas Hall.

White tents are lined up along the Boulevard across the green lawns of Dallas Hall.

Plenty of food and drink is available for all, accompanied by music and games.

However, for many, the term “Boulevarding” is one that does get mucked up with other notions such that term, “tailgating.”

That would bring shame upon the Hilltop’s altercation of the pregame event. From the attire being sported to the white glossy tents, it’s easy to note the unique factors of SMU that separate this “tailgate” from all others.

With two years of Boulevarding under his belt, Chapline has nailed the definition of the event. It truly encompasses all factors of SMU, including its distinctive style.

On any other campus, tailgating attire would be a simple school shirt accompanied with jeans.

This particular weekend is “White Out,” where SMU calls on all students to wear white to show support for the Mustangs.

The apparel, although responsible for the reds, blues and whites being splashed across campus, is not the only colorful element of the Boulevard.

“My favorite memory would be during homecoming, when it was raining and muddy, and Jack Ingram was playing live,” Chapline said.

Entertainment is key in the Boulevarding experience.

Music ranges from country, to rap and hip-hop and of course the traditional ‘80s rock and some weeks, live entertainment.

Besides these elements of fashion and entertainment, what makes Boulevarding so grand?

Other versions of tailgating at SMU have been popular for many years.

“My parents, and all my aunts and uncles are loyal SMU alums…They have been [boulevarding] for 30 years or so, which I think is awesome,” Chapline said.

Boulevarding has proven itself SMU-praiseworthy not just year after year, but generation after generation.

“This only increases my Mustang Pride, as I am doing what my whole family was doing 30 years ago,” Chapline said. “I am a man of tradition, so I think that’s really cool when I get to boulevard with them.”

And it is tradition that roots so many to, as sophomore Rachel Wilson puts, “the “pony-themed, sun soaked march of glory.”

The Boulevard fulfills its purpose of uniting the student body and reviving school spirit.

“Students get to see friends, socialize with new people, and show our support as a whole for our fantastic school,” Graves said. “School spirit is encouraged by everyone parading around, and helps others embrace SMU pride as well.”