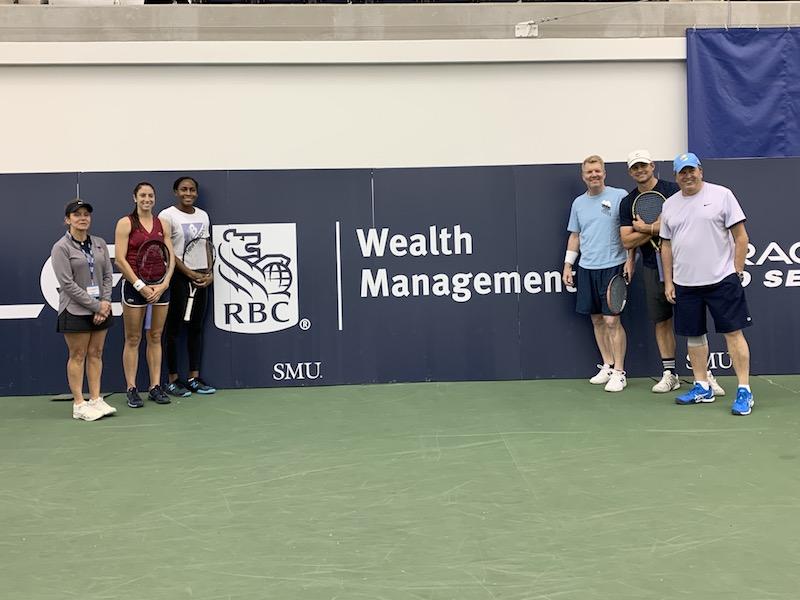 The Oracle Pro Series capped off their week of tennis on SMU’s campus with sold-out exhibition matches between some of the biggest names in tennis on Friday night.

As part of the ITF World Tennis Tour, a $25,000 event took place throughout the week at SMU’s Tennis Complex. The tournament is part of the recently launched Oracle Pro Series. This includes more than 25 new ATP, WTA, and ITF World Tennis Tour professional tournaments across the country throughout the next year in hopes of increasing professional tennis opportunities in the United States.

“This is Oracle’s vision,” said Courier, “to try and give American-based players more professional playing opportunities. To have a chance to stay home and not travel over seas is massive. I think we are going to see significant impact in a few years time from these new playing opportunities.”

In the first match of the night, 15-year-old Gauff secured the win against McHale in the one set match 6-3. During the set, Gauff took a step back and gave her racket to one of the ball girls, allowing her to participate in the set. This was a special moment for the ball girl, a 17 year-old tennis player who had the chance to return McHale’s serve.

@CocoGauff can’t drive but the ball girl who hit with her can. 15 years old serving it up at SMU! #proseries pic.twitter.com/6PCqn3DNrc

Gauff has been to Dallas before, but never to SMU. Similar to the other players, she was impressed with SMU’s state-of-the-art facility.

“The facility here is really nice,” said Gauff before taking the court.

Following the women’s singles, Courier and Roddick stepped onto the court in a match filled with heckling each other and the line judges. Roddick took the set 6-3, as his friend Dallas Mavericks legend Dirk Nowitzki watched from the stands. Roddick and Nowitzki played at SMU back in September for the Dirk Nowitzki Pro Celebrity Tennis Classic.

“I’ve spent most of my life in Texas,” said Roddick. “And I’m so proud of the rich tennis history here, so it’s great to come back and play in my home state.”

With the singles matches complete, the four stars teamed up to play a mixed doubles match. The match was filled with witty remarks, great points, and fun for both the crowd and the players. Gauff teamed up with Courier to face off against McHale and Roddick. In the end, Team McHale/Roddick won the match 6-2.

Members of SMU’s tennis teams attended the matches to watch the professionals up close, a unique opportunity that they found invaluable.

“It’s been a really amazing experience,” said Nicole Petchey, a junior on SMU’s women’s tennis team. “You know, you watch them on TV, playing all the time and then to actually see them in person and to see the real speed of their ball and their attitude on the court has been really good.”