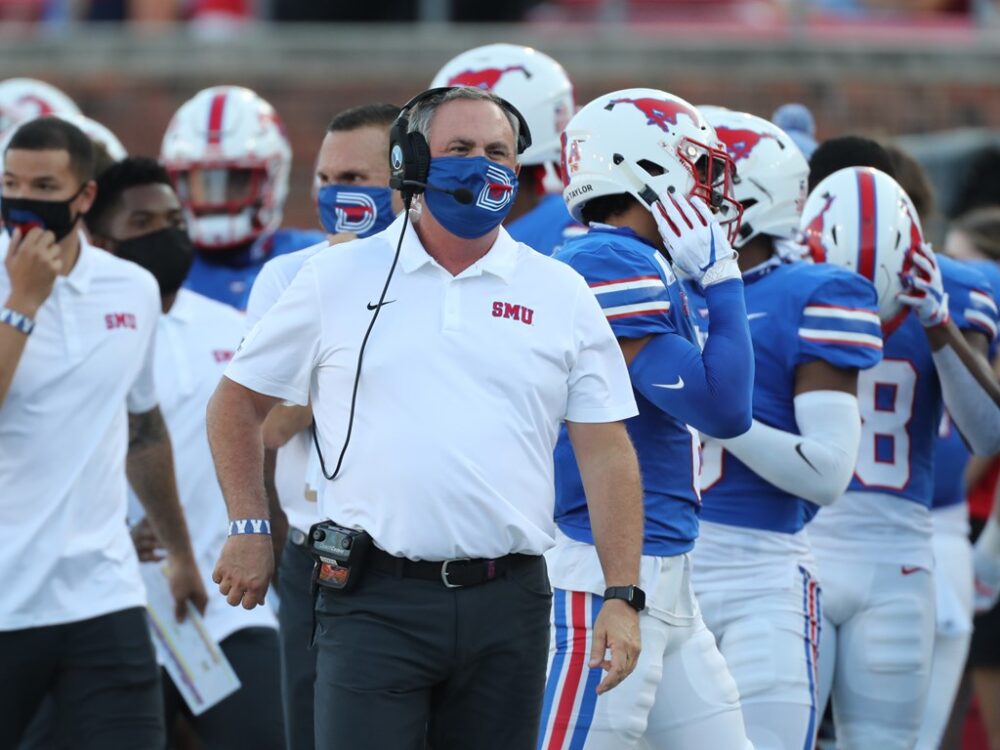 UNIVERSITY PARK, Texas — When UCF played its spring football game last week with players’ Twitter handles on the back nameplate instead of traditional names, SMU head coach Sonny Dykes saw it as a sign of a changing college football landscape.

Then, on Tuesday morning when the American Athletic Conference announced a new rule allowing intraconference transfers to play immediately, Dykes was given another stark reminder the NCAA is moving quickly in the direction of player empowerment.

“I think if the players want, it is good thing,” Dykes said on Tuesday of the recent changes. “But what we all have to be careful about is there is always unintended consequences that come with actions… I think the NCAA makes rules without thinking about the consequences often.”

Dykes used a media availability on Tuesday morning to talk about his mixed feelings on the direction of the AAC and the NCAA overall, both in terms of branding for players and the new transfer rules.

Dykes indicated he was inherently skeptical of “too much” attention on an individual player. That said, he also felt that if players were authentically able to create a brand and make money from it, they should be able to do so.

“Our job is to help our players create their own brand. We have some people who are going to work with them on how to do it. But I think at the same time we want our guys to understand they are also part of a football team,” Dykes continued.

SMU football began to work with Jeremy Darlow last season, a known brand ambassador for players and college programs. Since then, individual players on the roster have created logos and other brand associated material for Twitter and social media projects.

SMU wide receiver Rashee Rice has been outspoken in promoting his own logo of the “Double RR” on Twitter. Fellow wide receiver Danny Gray has also created his own “Cinco” logo.

“I like this,” SMU safety Sam Westfall wrote on Twitter last week in reference to UCF’s push.

The conversation from UCF’s Twitter handle gesture also brought up the idea of paying players. The “#NCAANotProperty” movement that took over the March Madness basketball tournament last month pressured that concern as well.

“The notion that we will pay players is never going to happen because of Title XI,” Dykes said. “If we pay a football player, we will have to pay every single athlete in the department the same amount of money because of Title XI. Athletic departments aren’t going to be able to afford that.”

On the transfer rules front, the AAC also joined the Atlantic Coast Conference (ACC) and the Mid-Atlantic Athletic Conference (MAAC) allowing transfers to play immediately if they to transfer to schools within the conference, increasing player mobility.

However, while each team will be able to have over 85 scholarships for the upcoming season, there is still a 25-scholarship hard cap for the number of new scholarship players that can be brought in.

This will inevitably mean many players will be without a destination. It will also mean that many schools will not be able to get to the 85-scholarship threshold, since they have already signed a freshman class and cannot go over 25 new scholarships even if there are transfers in the portal who would make a good fit.

“You are going to have hundreds of college football players in the portal who are really good football players with literally nowhere to go,” Dykes said. “Somebody told [the NCAA] it was a good idea there was a 25 hard cap on scholarships.”

“We are going to be like many teams across the country with less than 85 scholarships,” Dykes said. “It is a real problem and there doesn’t seem to be a lot of interest by the NCAA to address it quite frankly. But I have always felt that players should be able to do what they want to do. At the same time they have to be educated and I don’t know if we have done as good of a job educating them as we should have.”

For now, Dykes lands somewhere in the middle on these changes. He worries about the consequences, but is behind the principle.