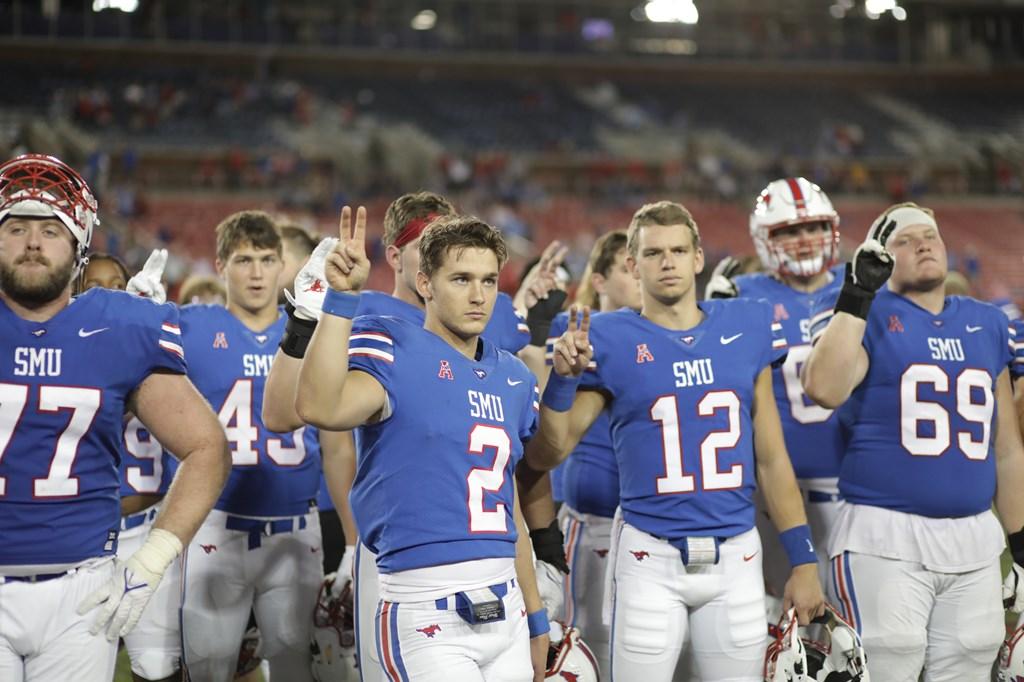 UNIVERSITY PARK, Texas — For about a half an hour after practice last Sunday, Preston Stone stayed inside Lloyd All-Sports Center, shoulder pads on, throwing fade, over-the-shoulder passes to Grant Calcaterra.

After most throws, SMU’s starting tight end would give a pointer here or there to Stone. It was a veteran taking a freshman under his wing. The present of the program guiding the future.

But maybe, as it turns out, it’s not such a distant future.

Stone’s time under center, according to SMU head coach Sonny Dykes, may come on Saturday against Central Florida.

“We’re going to get him in the game and just let him see what he can do,” Dykes said on Tuesday.

And so the Stone era at SMU — which fans got a taste of against Tulane on the final drive of the game — may begin in earnest this weekend. Even as starting quarterback Tanner Mordecai is healthy and one touchdown away from breaking the single-season school record, the true freshman looks like he will play.

“Sometimes it’s good if your starting quarterback can take a break sometimes and stand on the sidelines,” Dykes said. “Sometimes he has an ankle sprain or you get far enough ahead where you can get [Stone] in the game. So there’s just all these different factors that go into it. Our goal is to try to get Preston in the game and just kind of see how he does, see what he does, and try to get him some experience.”

Experience, for Stone, has been something hard to come by. As SMU’s highest-rated recruit since The Death Penalty, according to 247Sports, Stone enrolled in school early last December to be in the mix to start immediately.

But then Mordecai transferred in from Oklahoma and, after a drawn out quarterback battle, won the job.

And from there, Stone has largely taken a backseat. Mordecai has started all nine of SMU’s games, guiding the team to a 7-0 start and climbing inside the top 20. He also had 34 touchdowns, tying the school record set by Shane Buechele in 2019.

There were brief moments where Stone could have forced his way into the game in blowouts, like at Abilene Christian or North Texas in the first handful of weeks. However, Dykes was reluctant to get him in the game or burn his redshirt.

Stone did not play at all until Tulane, in the seventh week of the season, for one series that ended in a rushing touchdown.

“We just wanted him to have meaningful reps,” Dykes said earlier in the year. “If he is going to play in four games [to maintain his redshirt status] we want them to be meaningful.”

But those restrictions are now lifted. If Stone plays in the remaining three games of the regular season, he can still maintain the redshirt.

SMU has also lost two-straight games and fallen out of contention in the American Athletic Conference. Mordecai hasn’t looked bad. But he had a hand in two turnovers against Memphis last week and threw an interception against Houston.

So it all brings it to this. The coalescing factors of the redshirt and the losses will have Stone playing.

It might seem interesting to not play a junior about to break the school record as much as possible. But Stone has forced his way in.

One thought on “The future… now? Freshman QB Preston Stone may play on Saturday, even with healthy Mordecai”