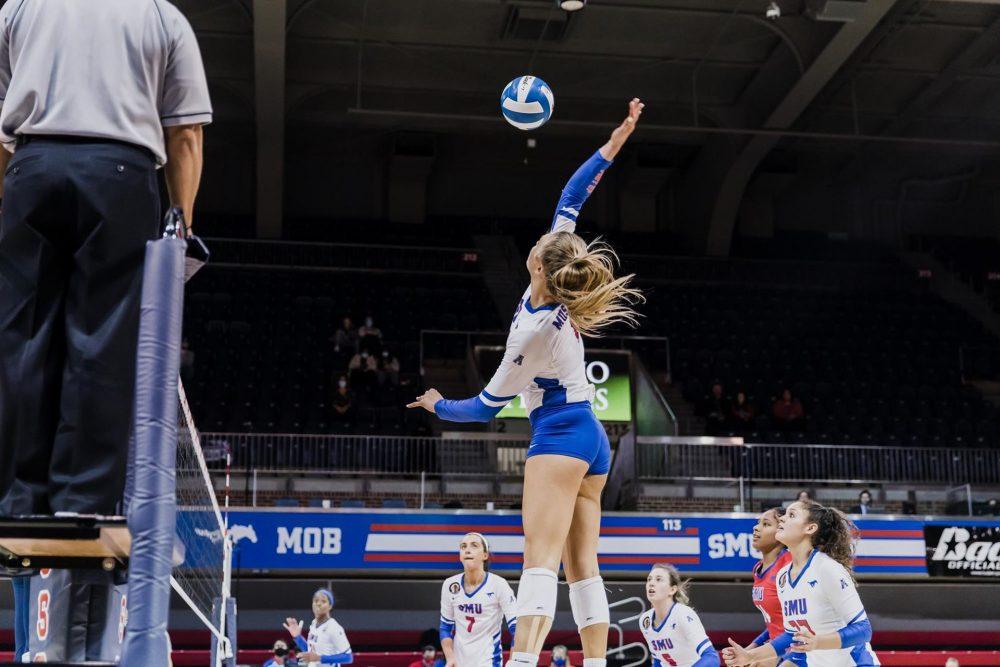 Jadyn Bauss’ dominance was on full display as the Mustangs took care of business on Friday night. The outside hitter came at all sorts of angles to distort any defense that UTSA’s blockers set up for her. Her offensive game catalyzed SMU’s victory, while the Roadrunners struggled to keep the ball in play for much of the game.

The Mustangs started the first game off in the lead, before the Roadrunners tied it up at 16. Jadyn Bauss took advantage of her next three attacks, set up by premier setter Lily Heim, and converted them into points for SMU, helping rally the team past UTSA in a somewhat close first set. It was clear from the start SMU had the upper hand in nearly every statistic. Especially its offense, which was over 0.17 percentage points higher than their opponents.

Their offense sent UTSA’s defense was scrambling everywhere, struggling to receive hits and keep rallies going as wing players Bauss and Hannah Jacobs crushed ball after ball while Heim made sure they were well-supplied.

The Mustang’s defense was also held steady by junior Kaylyn Winkler, who notched timely blocks during the second set to help kill any momentum the Roadrunners looked to gain over the Mustangs. Any time UTSA went on a run of two or three points, SMU timely responded through their powerful front row attacks or dumps, which rendered the Roadrunners blocking schemes useless. Consistent blocking helped SMU secure the second set.

The third set wasn’t close. SMU took over from the start, going on a 10-3 run while UTSA stepped on their own toes, serving out of bounds and performing numerous errors to further the gap between themselves and the Mustangs. The third set rolled into a blowout, as SMU more than doubled UTSA’s score, and ended up winning by 13 points.

Bauss notched a double-double in her third game of the season, with 13 total kills (0.407 hitting percentage) and 13 digs alongside one block. Bauss and Jacobs combined for 25 kills in the game, with only three combined errors or mishits.

Heim had another great evening, totaling 40 assists and no errors, while guiding SMU to a hit percentage of 0.363 compared to UTSA’s 0.136.

SMU’s defense was also kept steady by Makayla Miller and libero Bria’ Merchant, who had perfect nights and combined to receive 17/17 digs for the Mustangs.

SMU advances to 3-0 for the season. The Mustangs will face the Roadrunners in a rematch on Saturday at 2pm Central at Moody Coliseum in Dallas, TX.