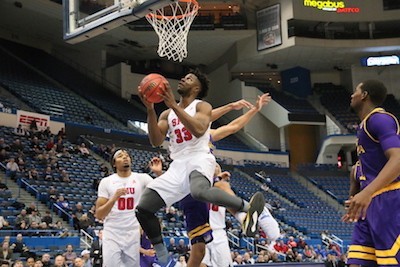 HARTFORD, Conn. – SMU entered the postseason with one unanswered question that stems from a good problem.

In all 27 of SMU’s wins this season – prior to Friday – SMU had not been tied in the final minute of a game. The reason, of course, is because its average margin of victory in conference play was nearly 18 points per game. It begs the question: What would SMU do when it inevitably finds itself in a tight game in the final minute(s), or when it trails by a basket? It’s the postseason, where those scenarios are all too common.

Friday, SMU found itself there, tied at 77 in the final minute vs. East Carolina in the American Athletic Conference Tournament quarterfinals. And it found an answer, in an obvious form.

Surprise, surprise. The conference player of the year was the best player in a game and the player who scored the game-winning points. But this is SMU, the team that identifies as unselfish and interchangeable. But the ball finds its way to No. 33 anyway. He does average five more points per game than the next closest player.

Ojeleye, unsurprisingly, used one of SMU’s favorite lines this year to describe his game.

“Everybody can come out and have a great game, you know?” he said. “If you look at the stat sheets all year, everybody has had huge games, double-doubles, big scoring nights. Tonight it happened to be me.”

“He’s capable, obviously,” Jankovich said. “But he said it best, we have a bunch of guys.”

They do have a point. All five of SMU’s starters have scored 18 or more points in a game at least four times this season, after all. Each of them has at least one double-double. But none has had a performance like this.

Ojeleye scored 36 points and added 12 rebounds in Friday’s narrow win. He scored 44 percent of SMU’s total points and grabbed 38 percent of its total rebounds. More importantly, nine of those points came in the final four minutes, right as ECU was in the middle of its comeback.

With SMU clinging to a 71-69 lead with just under three minutes to go, Ojeleye received a pass on the wing. Isolated with a defender on him, he took – and made – a 3-pointer. The ball was not going to anyone else.

Later, with the score tied at 77 in the final minute, Sterling Brown lifted a floater. Right as it left his hand, Ojeleye sprinted toward the hoop. The ball hit the front rim, and then found Ojeleye’s hands. Its next stop was the bottom of the hoop.

Another lift, courtesy of Ojeleye. And the latest game in trend that’s becoming more obvious. Ojeleye may not admit it, but he’s the answer for any lift SMU needs. Looking back, there were signs.

Sterling Brown, who has carried SMU in a couple games himself, has noticed.

“We’ve seen it a numerous amount of games, him step up and make big shots and lead us to victory,” Brown said. “It’s something he does. And we’re happy and we’re proud of it. We’re going to keep riding it.”