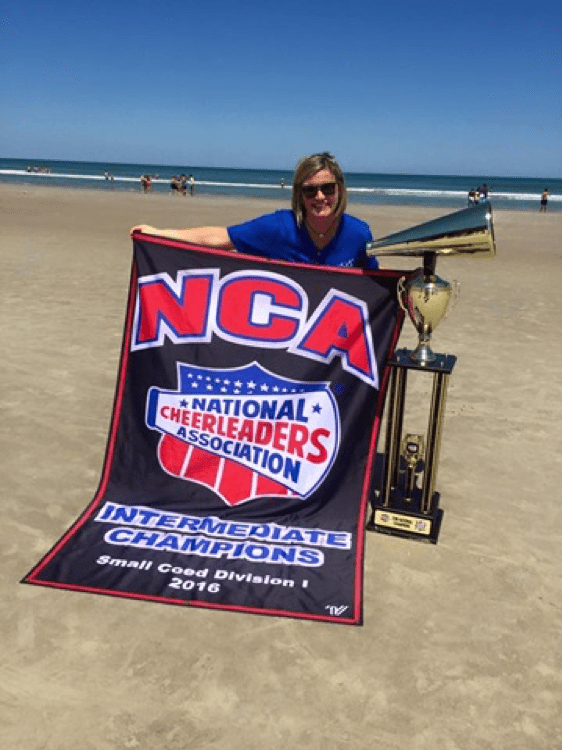 Thank you notes, medals, competition lanyards, pins, and pictures cover the walls of Tiffany Fettinger’s office in Dedman Center for Lifetime Sports. Fettinger has been the SMU Cheer coach for SMU since 2016, but her involvement with SMU Cheer started in 2010 when she was a freshman student, trying out for the Division 1 cheer team after cheering for many years in her youth.

In her role as SMU’s Spirit Coordinator, Fettinger coaches the cheer and pom teams as well as being the mascot and Peruna Handlers director. Most students who end up on the cheer team have been cheerleaders most of their life, similar to Fettinger.

“I did gymnastics growing up, twice a day, and went to a special school for it,” she said. “I quit when I was 13 and I felt like I had spent all of this time learning how to do all of this stuff and didn’t want it to go to waste, so my friends at school told me about the All-Star cheer team they were on. I gave it a try and loved it.”

All-Star cheerleading is a competitive sport where cheer gym teams throughout the nation compete against each other at nationwide events. All-Star teams perform a 2 minute and 30-second routine that includes tumbling, stunting, jumping, dancing and cheering.

Fettinger enjoyed All-Star cheer, as the sport allowed her to combine her advanced gymnastics skills with her new stunt and jump sequence skills to create a two minute and 30-second routine for competitions nationwide.

“I did All-Star cheerleading all the way through college along with SMU cheer, and then I started coaching at the All-Star gym I cheered at when I was 19 until I was 29,” Fettinger said.

After graduating with a B.A. in psychology and working for a hospice company for two years, Fettinger returned to SMU when the Spirit Coordinator position opened up.

“The biggest thing I love about coaching is that it’s at SMU. My best friends are the people that I cheered with here so it’s nice to coach here, give back, and continue a legacy,” Fettinger said.

Apart from knowing the ins and outs of the cheerleading world and having years of experience under her belt, Fettinger is also a mentor to the team. They often refer to her as “mom,” even though she’s not much older than her athletes.

“[I teach them] how to prioritize and keep a commitment. Usually, they want to be committed but get overwhelmed with school and social schedules, and I [explain to them] they can do it all, they just really have to prioritize and plan ahead,” Fettinger said.

When she talks about coaching, Fettinger’s face lights up and her smile grows big. For her, every season is a new challenge she relishes.

“We all experience the growing pains together with a new set of personalities each year and have to find a unique way to be set up for success,” she said. “I watch their confidence grow and their true personalities come out as the year progresses. The friendships they make and the bonds they create are unlike any other, and I love the pure joy they have on their face when they come off the floor at nationals.”

SMU Cheer is currently on a “three-peat” victory streak under Fettinger’s coaching, and she has the large gold national trophies in her office to prove it. Former cheerleader, Sarah Walden, credits Fettinger’s vast skill set to the team’s success.

“Since [Fettinger] was an SMU cheerleader herself, she knew what it was like to be in our position and could use her experience to better our team. She understands technique and skills as well as she understands game day and SMU history,” Walden said. “She always pushes the team to be the best athletes and individuals we can be, making sure everyone’s light shined on and off the mat.”

The SMU Cheer program has prospered under Fettinger’s coaching, and she’s working hard with her team towards a fourth victory at NCA College Nationals in early April. With her dedication and talent, she’s positioned the team for success.