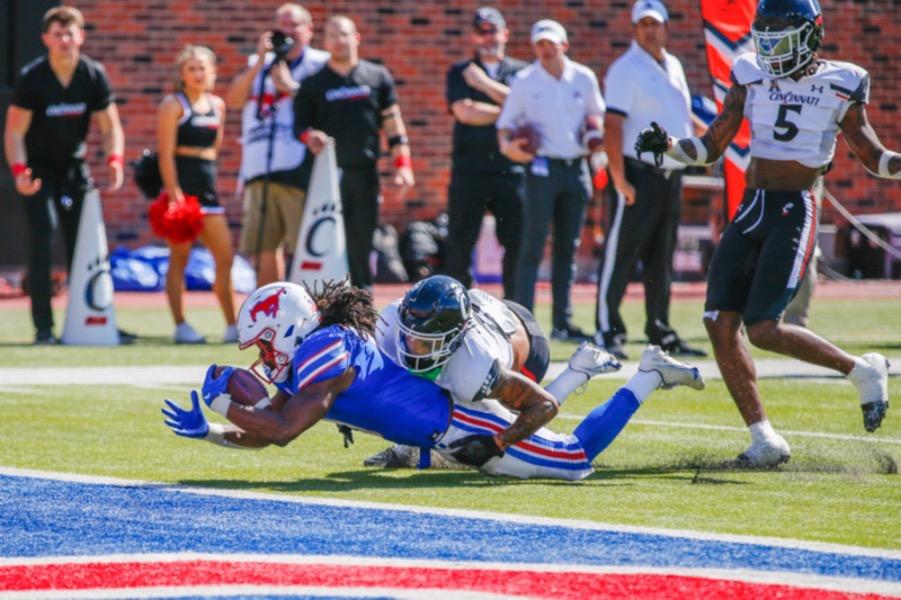 UNIVERSITY PARK – SMU quarterback Preston Stone rushed 4 yards to the Cincinnati 1-yard line. The crowd roared in support. SMU needed to score, and quickly too. Stone set up for another play, this time handing it over to Tyler Lavine who snuck into the Cincinnati endzone. Touchdown SMU and a two-point game with 1:57 on the clock.

Colin Rodgers’ kick lined up for his kick and buried it. An important extra point, but SMU needed a stop during the next play. Cincinnati now had the ball. The Ford Stadium was filled with “defence” chants. Cincinnati QB Ben Bryant threw the ball to receiver Josh Whyle. First down Cincinnati. The game was over, but was it close.

“I’m obviously really disappointed,” said Rhett Lashlee, SMU Head Coach. “We put ourselves in a position to have a chance to win the game but didn’t get it done. It’s a pretty disappointed locker room and it’s tough as a coach because I’m really proud of our team.

As it has done for most of the season, SMU gave up most of the first half and by the end of the second quarter, was significantly down (17-0 on the day). The game-chasing response, however, was very commendable as the Mustangs went into the half with a one-possession game, at 20-14.

The half was spent discussing how SMU could win the third and fourth quarters after a poor first half, Lashlee said.

“Whoever had the win won most of the quarters, and we just didn’t win our first two quarters by enough offensively,” he said. “We had the momentum even though it was 23 – 14, and to start with a holding penalty on our first two drives [of the second half] was detrimental.”

Although the last few minutes were very cagey and showed huge prospects for an SMU comeback, there just wasn’t enough time for the Mustangs to equalise. The comeback included two touchdowns by receiver TJ McDaniel and an impressive tipped touchdown by RJ Maryland.

SMU’s defence played a big part in the game, keeping Cincinnati to only 200 yards, the least they have had all year.

The defence played very well to keep us in the game, said Lashlee.

“They hung in there and played really well with the exception of the one long touchdown. We really limited their explosive plays,” he said.

SMU Quarterback Tanner Mordecai had to be withdrawn from the game late in the third quarter after he appeared to have sustained an injury. Before he left, he threw for 105 yards and one touchdown. Backup QB Preston Stone made an impromptu appearance and saw out the game, finishing with 74 yards and one touchdown for six pass completions.

“I was ready to go. I really was,” he said. “I try to stay ready. You prepare all year for a moment like this.”

SMU was very close to putting an end to Cincinnati’s six-game unbeaten run, a run which has seen them climb to second place in the AAC, only behind Tulane.

With this defeat, SMU’s season tally is now 3-4, 1-2 in the conference. The Mustangs face South Florida in Tampa on November 12.