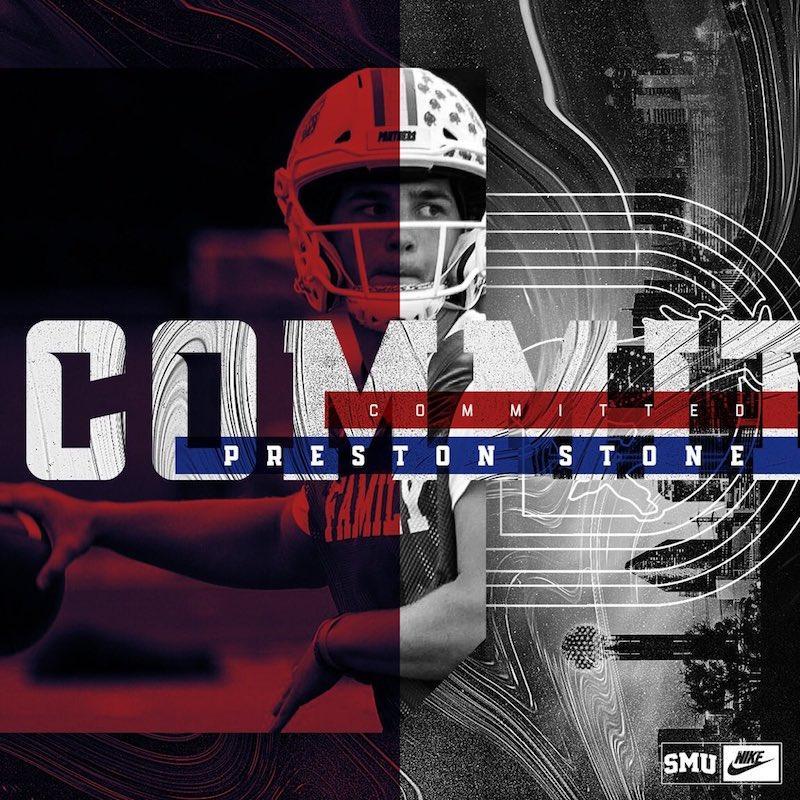 The Mustangs’ future roster got a little bigger on Saturday as quarterback Preston Stone announced his intentions to attend SMU once he completes high school. The Dallas-native was competing in the 2020 All-American Bowl when he made the announcement on national television.

Stone, who will be graduating in 2021 from Parish Episcopal, is a four-star recruit ranking among the top high school athletes in the country. He joins Izaiah Kelley, who committed on Nov. 11, on the list of 2021 commits.

Stone selected SMU from a list of over 40 different schools including LSU and Alabama. With the decision to be a Mustang, the young quarterback will not only get to stay in his hometown, but also will be following in the footsteps of his father, Ted Stone, and brother, Parker Stone. Ted studied finance and political science at SMU and took his sons to SMU games when they were growing up. Parker plans to enroll at SMU in the next few weeks and will also join the football team’s roster as a wide receiver.

“In my opinion, SMU is the most attractive school in the country,” Stone told the Dallas Morning News. “I have full faith in the SMU coaching staff and the program to take care of my future.”

This season, Stone threw for 3,721 yards and 37 touchdowns, only recording four interceptions. He also helped lead his team to the D-1 State Championship in the Texas Association of Private and Parochial Schools this year.

Many SMU players, like Stone, selected to play at SMU not only because of its football program, but also because of its location being close to their homes. SMU’s current quarterback Shane Buechele spent three years as a Texas Longhorn before transferring to SMU, just 30 minutes away from his family in Arlington, to complete the rest of his NCAA eligibility. James Proche, Demerick Gary, and Turner Cox are all also natives to the DFW-area.

SMU’s season this year came to an end in December after they competed in the Boca Raton Bowl against Florida Atlantic.