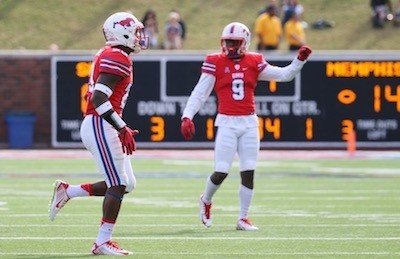 Three SMU football players will have the chance to play in the NFL. Two seniors from last year’s team have signed with teams as undrafted free agents, and another earned a mini-camp invitation.

Richardson and Millines were first-team All-American Athletic Conference selections in 2016. Richardson led the AAC with six interceptions and was No. 3 in the conference with 14 passes defended. He started all 12 games in 2016 and made 25 starts over the course of his SMU career.

Millines finished No. 2 in the conference with five interceptions and No. 3 at SMU with 64 tackles. He made 34 starts in his final three seasons at SMU.

Briggs started 10 games at right tackle and one at left tackle in 2016. He made 33 starts in four years at three different positions along the offensive line.

No SMU player has been selected in the NFL draft since 2014. Wide receiver Courtland Sutton, considered SMU’s best NFL prospect, chose in January to return to school for the 2017 season. He is seen as a potential first-round draft pick in the 2018 draft.

A team’s rookie minicamp usually has 40 to 60 players, which includes draft picks, undrafted free agents and camp invitees. Mini-camp tryout players are not offered contracts until after the camp.

Not every player who tries out gets offered a contract. Millines will participate in the 49ers minicamp May 5-7.