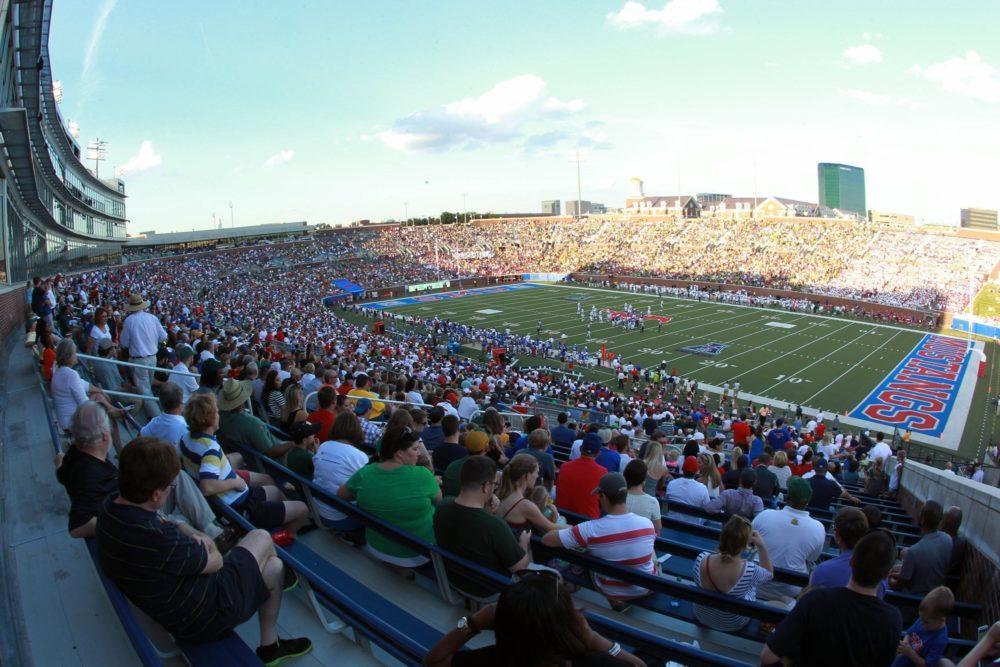 As more Power Five conferences continue to transition to a conference-only college football schedule for the upcoming fall season, SMU’s athletic department said it has no plans to follow suit.

SMU Athletic Director Rick Hart spoke out in favor on playing a full 12-game season on Thursday afternoon, saying SMU still expects to host teams with fans in the stands while playing all four non-conference games originally on the 2020 calendar.

“Most of our early games are in the state of Texas. So, our eyes are on that ball. We are trying to play all of those games and get through our fall seasons,” Hart said. “We are well positioned to compete in a number of sports, including football. Until we can’t do that, that is our goal and that is our focus.”

“If that, for some reason, gets disrupted we do have other plans that we can adjust to and pivot to. But, right now, we are just focused on beginning to prepare for our fall seasons in about a month,” Hart added.

Hart’s comments come on the same day the SEC announced that it would play a 10-game, conference-only schedule starting on Sept. 26.

The Big 12 has also been reportedly mulling over a conference-only, plus-one schedule where its member institutions could play one, local out-of-conference game. That development could potentially impact SMU’s non-conference contest against TCU, scheduled to be played in Dallas on Sept. 26.

The American Athletic Conference, which houses SMU, has remained silent on its plans to for the fall. Commissioner Mike Aresco told The Daily Campus two weeks ago the conference would have an update by the end of the month on the viability of a football season.

As of right now, Hart indicated that a Sept. 5 start date is still a realistic timeline, with fall camp for football starting even earlier than that. Texas State, Stephan F. Austin, North Texas and TCU, SMU’s four non-conference opponents, have all been in contact with the athletic department and are currently weighing scenarios.

As the schedule sits, SMU would have to travel to San Marcos and Denton within the first three weeks of the season. Notably, Texas State asked its students to self-quarantine for 14 days prior to coming on campus because of the proximity to major cities like San Antonio.

“It is a balance between being prepared and trying to change direction as few times as possible, Hart said. “We don’t want to get too far ahead of it. But now a month out, five weeks out, we have to have a lot more activity [in making decisions].”

One of the major decisions for Hart will be allowing fans into the stadium. Earlier in the month, SMU athletics sent an email to season-ticket holders saying that “at least a portion” of home games would feature reduced capacity. Still, the department has continued to sell season tickets.

Since that announcement, many other programs in college football have stated no fans would be allowed into stadiums. The University of Texas has hinted at filling 25% capacity of its stadium for home games. The University of Houston, a fellow AAC member, said it intends to make a similar move.

Hart noted, however, that SMU has remained unchanged in its stance on continuing to sell season tickets. Gerald J. Ford Stadium is expecting to host a number of fans, although Hart did not divulge any percentages.

“We will probably announce that plan [for season tickets] within the next 10-to-14 days. There are some approvals we need to run those plans through the university, city and state levels,” Hart said. “We feel at this time, again, that we will have fans in the stands. We will be able to accommodate our season ticket holders, students, faculty and staff. That is our primary goal.”

“If we can go beyond that, we will. We also know that game one might look different than game two, three, four, five and six. We have to be able to prepare to adapt one way or the other,” Hart said.

Head Coach Sonny Dykes and senior quarterback Shane Buechele both echoed the idea that SMU plans to start fall camp and play a full schedule on time. Dykes stopped short of saying he didn’t understand some of the conferences, specifically the SEC, who have gone to a conference-only slate. He did, however, say that he feels SMU’s all in-state, non-conference schedule will give the program a better chance to play all 12 games.

“I wasn’t completely surprised to see the [SEC do that]. It seems like kind of the trend. I am not quite sure why. I don’t really understand that way of thinking,” Dykes said. “I mean, I do in some ways. There are some people that are talking about the season starting a little bit later and trying to get the students on campus… Look, we want to play 12 games.”

Dykes added a thank you directed at Hart and university President Gerald Turner for “understanding how important it is for us to play.”

Buechele was not asked about the SEC and some of the other conference’s decisions. Instead, he provided a glimpse into the player aspect of preparing for a possible Sept. 5 start date.

“Whatever is going to happen, we really don’t know. I keep saying it, but we are excited for the season no matter what it comes with,” Buechele said.