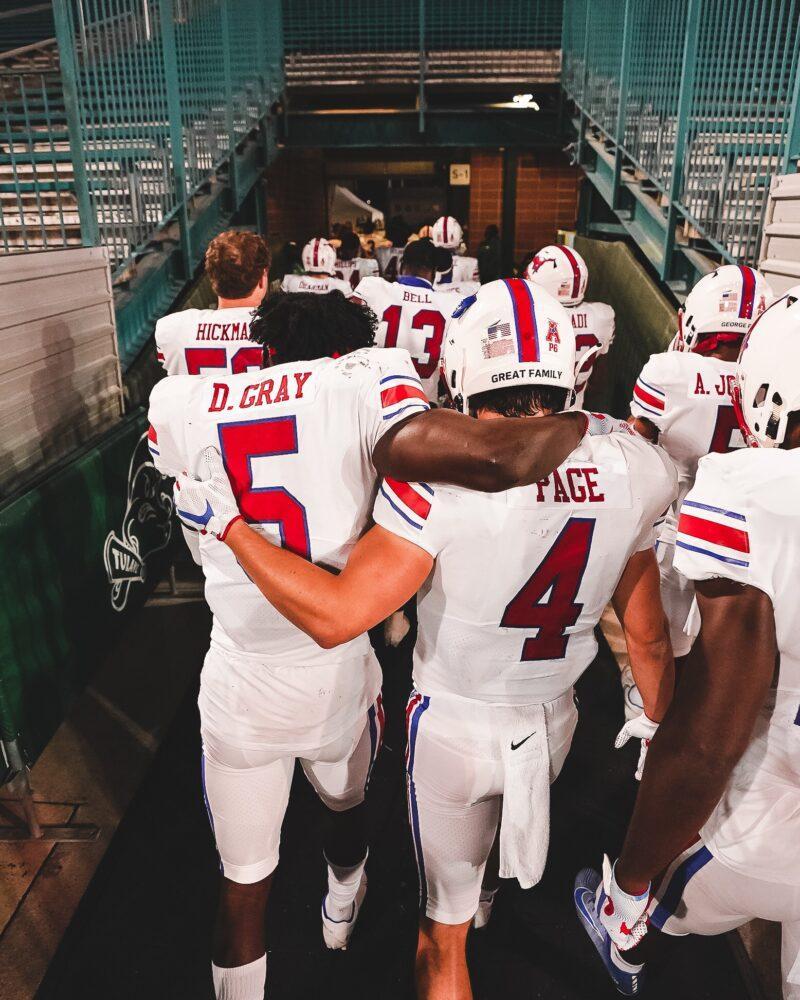 Flashback to Week 9 of last year’s college football season. SMU was riding high at 8-0, and the conversation was centered around the conference championship game and a possible trip to the Cotton Bowl. The defense was producing negative plays, a national leader in sacks and takeaways, while the offense was overpowering opposing defenses.

Shane Buechele had transferred in, and led the team to victories against TCU, a triple-overtime comeback win against Tulsa, and a blowout win against ranked Temple. Like I said, the Mustangs were on cloud nine when it was announced that the game against Memphis, a crucial one that could decide who would go to the conference championship game, would be played in primetime on ABC.

This was one of the biggest games for the program since the death penalty. In the end, Memphis left the field having wrestled those Cotton Bowl and American Conference Championship hopes from the Mustangs. The mood as the season ran its course was subdued compared to the beginning of the season, and the program began to look to 2020.

It has been a tumultuous year for the world, no different for college football. Conferences have canceled games and seasons, with COVID-19 the capricious master pulling the strings thus far. SMU has felt the effects of the virus acutely through the postponement of the all-important matchup for the Iron Skillet against TCU. However, if you happened to wake up from a hibernation that began in 2019, crawled out from underneath your rock and immediately checked SMU’s record, you would be forgiven for thinking 2020 was merely a repeat of 2019. SMU, lead by a prolific air attack, is undefeated heading into a primetime game against a ranked opponent that has the potential to either launch the Mustangs towards a potential New Year’s Day bowl, or snap them back to reality.

The Mustangs are also missing Reggie Roberson, their number one weapon on offense. Roberson went down in the third quarter against Memphis with a season-ending injury. Despite playing one less game, he still leads the Mustangs in touchdown receptions and receiving yards. One would be forgiven for thinking that, without Roberson, the Mustangs will not be able to produce the same type of offensive displays fans have become so used to over the past two years, and therefore the team does not have the ability to summit the challenge that proved too difficult last year.

However, I would direct that person to the highlights of the Tulane game. Danny Gray, Tyler Page and Rashee Rice all racked up over 100 yards receiving, with Rice and Gray catching touchdown passes.

One facet of Roberson’s game is his penchant for big plays, and the Mustangs offense has thrived on those types of plays from Roberson when he has been on the field over the past couple of seasons. The wide receiving core was able to step up and fill that void against Tulane as well; all three of Rice, Gray and Page had catches of over 40 yards.

Rice and Gray also picked up the slack in regards to touchdowns, each catching one against Tulane. Gray proved he is able to help the offense on the ground as well, rushing for a 32-yard touchdown early in the game. According to Head Coach Sonny Dykes, “Our wide receivers made a lot of plays”.

Dykes is right: overall, the Tulane game showed the Mustangs offense still has the firepower to hang a crooked number on teams through big plays even without Roberson.

The question now, though, is did the Mustangs offense merely catch lightning in a bottle, or is this offense able to reproduce this type of performance regularly?

Saturday against Cincinnati may provide the answer to this question. Dykes said that not only is Cincinnati, “one of the best teams in the league,” but also one of the better defense. Points against Tulane were likely easier to come by than they will be against Cincinnati, and the Mustangs’ offense will surely need to be operating at its highest level when they step onto the turf at Ford Field.

For now, it looks like the Mustangs offense has the capability to score big without Roberson, but consistency is the aspect yet to be determined.

Once again, the Mustangs are in a huge game with ramifications stretching not only over the entire season, but the program as a whole. Dykes knows this, saying that the game will be a, “measuring stick to see where we are as a program.” Last year, SMU measured slightly short. This year… we will find out.