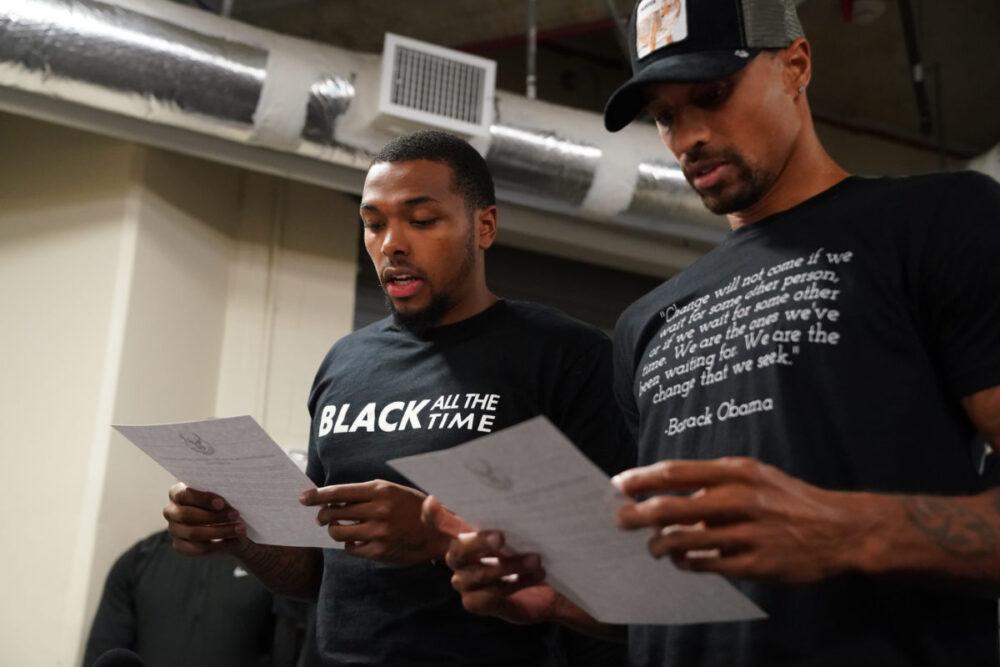 The overwhelming sound of nothing emanated out of the already surreal epicenter of the 2020 sporting world, Lake Buena Vista, Fla., on Thursday.

And nothing, in this case, said everything.

For the last three weeks, the NBA Bubble has been loud, continuous and forward in its goal. The saturated, eight-hour a day, national broadcasts streaming out of the Walt Disney World campus has made the NBA’s coronavirus experiment a hearth of conversation on both sports and society.

There are the games. The familiar rhythms of first round playoff series are so perpetual, it could fool viewers into thinking this setup was normal.

Then there is the social justice. Black Lives Matter stripes the court. Players tailor their jerseys with action slogans and coaches deck out their signature NBA Bubble polos with Racial Justice lapels. It is all designed to spur conversation using the league’s behemoth platform.

But when the Milwaukee Bucks walked out of an NBA playoff game in reaction to the Wednesday night shooting of Jacob Blake, all of that stopped. The rest of the NBA went on pause. The entire sporting world went on pause.

Compared with the last 51 days of frenetic NBA bubble basketball, the silence was jarring.

“Despite the overwhelming plead for change, there has been no action. So, our focus today cannot be on basketball,” Sterling Brown, a former SMU basketball player now playing in Milwaukee, said to reporters with his bubbled teammates wrapped around him.

And then one of the largest walkouts in professional sports started to trickle down.

Major League Baseball canceled three of its games — notably, the Texas Rangers played in Arlington on Wednesday before the opposing team informed the club it would not play on Thursday. The National Hockey League paused its own bubble experiment in Canada. Even the National Football League, known for its apolitical stance, took time off from practice.

At SMU, we’re about taking action and having real conversations. #PonyUpDallas pic.twitter.com/EpKUzXrkbX

“We had a raw and emotional conversation as a football team last night about social justice. I love our Great Family and I’m proud to be their coach,” Dykes said. “They will be a big part of the change that needs to take place in our country.”

Feron Hunt, SMU’s standout junior, tweeted he was considering not playing this season to focus on social justice issues. For Hunt, who has flirted with playing in the NBA, taking a year off would take on an even greater degree of significance for its impact on his basketball prospects.

“That tweet was meant to put people on notice. If I could change racism and social injustice in the world, and had to put basketball down, I would do that. I feel like that speaks more volumes than playing basketball,” Hunt said on Friday afternoon.

SMU student-athletes marched on Dallas Hall on Friday, bringing attention to the Black Lives Matter movement and Jacob Blake. Another protest is scheduled for Sept. 5. Interestingly, SMU’s first football game is scheduled for the same day.

Sports will soon come back to life. The NBA will play this weekend. SMU will go back to practice next week. But there is the hope that the unprecedented scale of these protests will instigate a profound difference.

In a sporting world marked by ever-present messaging, the silence is deafening.