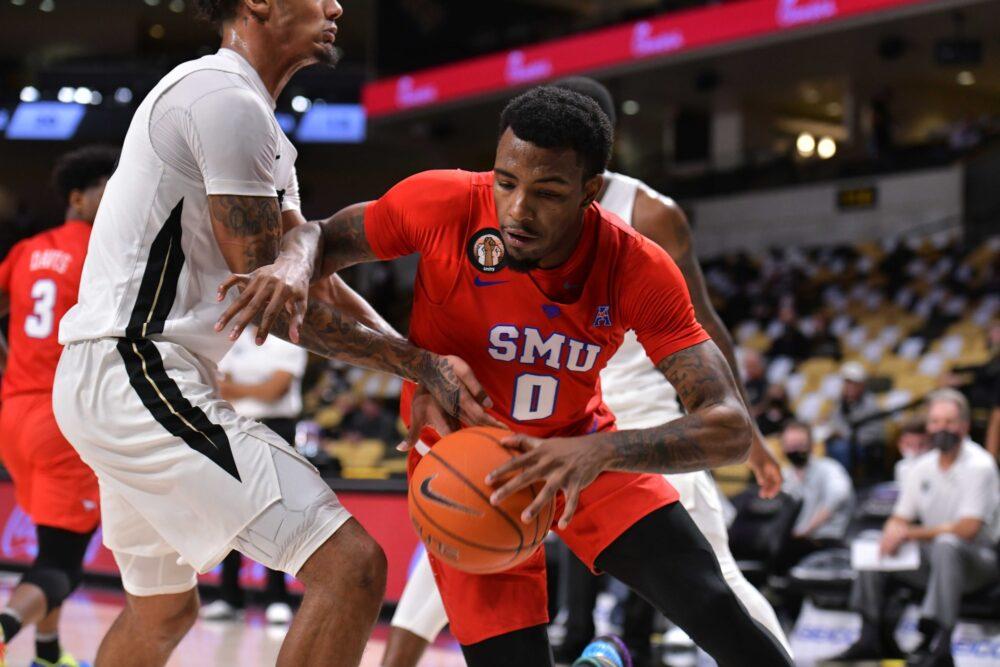 Moments after SMU pulled away from UCF on the road this afternoon, a 78-65 win in conference play, Tim Jankovich was in the locker room celebrating with his players.

On most days, that is a pretty unremarkable statement. For the head coach of a program to be talking with his team after a win is commonplace.

But today, SMU’s first game in nearly two weeks, commonplace was anything but an accurate descriptor for the scene that unfolded in the visiting locker room.

Jankovich was there, but only over the phone. It was a virtual celebration, where the 61-year-old head coach joined in with the team from his home in Dallas as he battled a low fever and a cough.

They were all celebrating one of the more unlikely victories in recent memory, where SMU was without both its head coach and top assistant coach due to COVID-19 symptoms and contact tracing.

After having its last three games postponed because of COVID-19 issues, SMU cobbled this win together with a coaching by committee approach. It was something that, even in this coronavirus season, felt improbable.

“It happened in such a short amount of time,” John Cooper, one of the coaches available for today’s game, said. “It is just a matter of trying to be like the team. Coming together and putting the group in the best situation possible.”

Cooper, in his first year with the SMU program, assumed the temporary title of co-head coach. Yaphett King, another assistant, became the other half of that equation.

The pair received help from pretty much any source they could.

Jon Ekey, the video coordinator for the past five seasons, stepped into a coaching role in Florida, jumping into the huddles whenever he could.

It all took on the feel, especially as UCF pulled within a single possession multiple times in the final ten minutes of the game, of a group just trying to will a needed victory into existence. Some, mainly the older staffers, looked more comfortable doing it than others.

“Everyone had a part in this win,” Cooper said. “I’m sure Tim was sitting there nervous at home. Now we can go back with a win and they will let us back in the office.”

And even having Cooper and King there today was unlikely.

The team spent much of the last week practicing with no coaches at all due to contact tracing and a positive COVID-19.

It was King who set off the entire chain of events, testing positive for the virus more than two weeks ago. The team shut down for a week, and nearly all the coaches were contact traced.

When the players came back to practice last Tuesday, only Nemanja Jovanovic was left to lead the team in drills and practice sets. Normally the director of player development, Jovanovic became the de facto head coach for the week.

To fill the void where Jovanovic couldn’t be in practice, players like Kendric Davis, walk-on Alex Tabor Jr. and Tyson Jolly played coach.

“We had to take practice seriously no matter how many coaches we had,” Yor Anie, SMU’s center, said. “We still had games coming up. Like we had some of the players (running things).”

On Thursday, a day before the group was scheduled to leave for Orlando, SMU was supposed to get most of its coaches back. King returned, along with Cooper, but another blow occurred in the process.

Jankovich developed a fever and a cough. He tested negative twice for COVID-19 in rapid tests, but had to quarantined until his PCR results became available. It meant he would miss the window for the team’s flight.

Jay Duncan, SMU’s top assistant, was contact traced. Similarly, Jovanovic was forced to quarantine after his stint as head coach was up.

“We’re an older team, so we took everything serious the week that they weren’t here,” SMU forward Feron Hunt said of the week. “We were able to get stuff done while they weren’t here. And I think just us being an older team and having a lot of older guys, we didn’t take advantage of our coach not being there.”

It ultimately culminated in a win, unlikely as it was. The performance was up and down at times, with the lead changing hands seven times.

SMU seemed unsteady in the first half, but the guiding force of Davis helped right the ship in the second. His 21 points and nine assists were the elixir, as they have been most nights this season.

It is unclear how long this set-up will last. Jankovich will have to test negative with his PCR test before Monday, when the team will leave for Memphis for a game on Tuesday, in order to coach.

Either way, this was the epitome of a coronavirus win.

SMU is now 8-2, catapulting itself into second place in the American Athletic Conference. With a double-digit win on the road, a Quad 2 victory, it moved up six spots in the Kenpom.com rankings to No. 50 in the country.

But nobody is necessarily wishing for it to stay this way. Maybe most of all, the coaches need a rest.

“We will wait and see what the doctors tell us. We will get ready for practice tomorrow,” Cooper said of what he expects the coaching situation to look like in three days.

“(But), after practice, I’ll be fired up for my hometown Kansas City Chiefs tomorrow night. That is what I am worried about,” he finished, walking away and closing the book on another remarkable chapter of 2020-21 basketball.