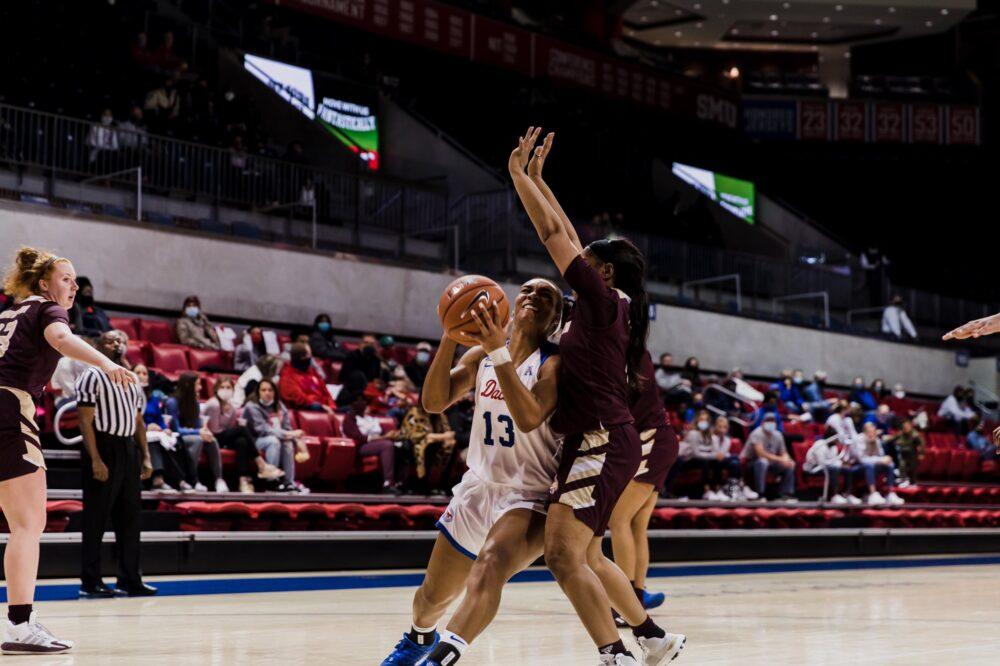 After not leading at all during regulation, Texas State overcame a 12-point fourth quarter deficit to defeat SMU 74-70 in overtime at Moody Coliseum.

Texas State trailed 60-48 with just over seven minutes left in the fourth quarter. However, from that point on, the Bobcats would finish the game on a 26-10 run that included a game-tying layup by Kennedy Taylor with eleven seconds left in regulation.

Both teams started the game fast with SMU clinging to a two-point lead after the first quarter. The Mustangs would capitalize on 10 Texas State turnovers in the second quarter to stretch their advantage to seven at the half.

SMU started the second half strong managing to build a 12-point lead. The fourth quarter and overtime belonged to Texas State though as Taylor and Da’Nasia Hood each scored 11 points across the two periods for the Bobcats to come out on top.

“I just have to give them credit,” Mays said. “They fought to the end. They made the proper adjustment, and it made us freeze a little bit. We just got to learn from it and try to get better.”

Hood led the way for Texas State with 25 points and nine rebounds. Taylor chipped in with 13 points and four assists while Ja’Kayla Bowie added 12 points.

Kayla White poured in 18 points and five rebounds after a slow start in the previous game. Rhyle McKinney had 10 points in her first start for SMU, but did so on just 4-of-19 shooting. Paige Bayliss had nine points and nine rebounds off the bench.

SMU struggled to make shots late in the game as it made just 3-of-16 shots from the field and scored only four points in overtime.

“I think we were playing not to lose,” Mays said. “We started playing careful, and I could see that we weren’t executing the details. We had opportunities to attack, and we didn’t.”

With this loss, SMU falls to 0-2 on the season. Their next game is in Stillwater, Oklahoma against Oklahoma State on Monday at 6:30 p.m.

“We’re good enough to win, but we got to believe it,” Mays said. “When you believe it, you have to trust, and you have to execute the stuff necessary. We just have to go out there and take it right now.”