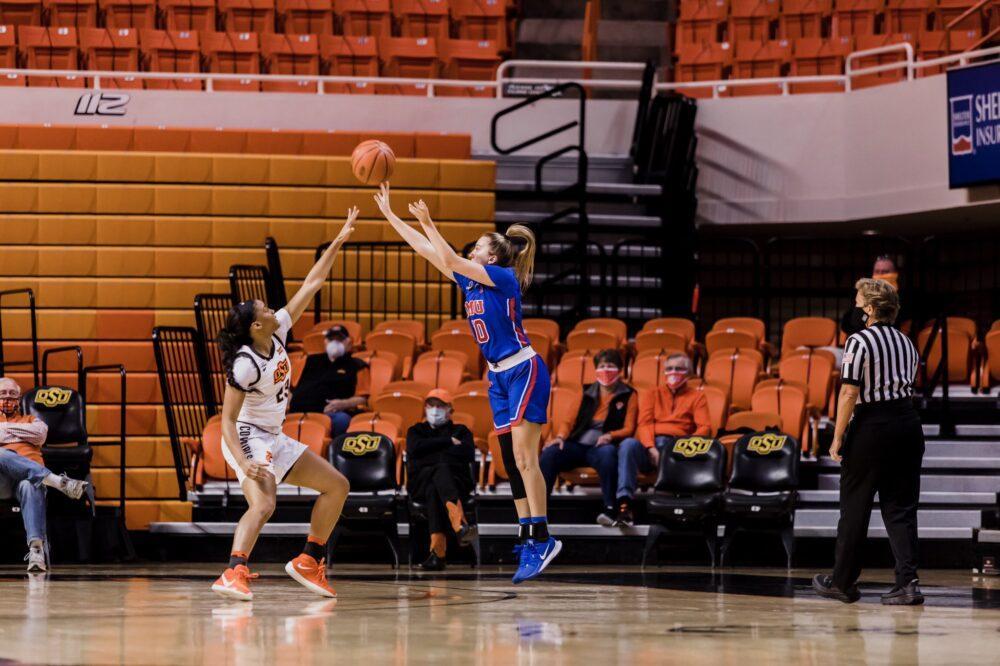 Oklahoma State overpowered SMU in the second half on Monday night in Stillwater winning 75-63. The Mustangs fall to 0-3 on the season.

SMU got off to a hot start with seven early points from Kayla White giving the Mustangs a four-point lead after the first quarter. Two quick three-pointers by Lexy Keys turned the tides for Oklahoma State and started a 12-0 run that put the Cowgirls up by two points at the half.

Natasha Mack came alive for Oklahoma State in the second half scoring 15 of her 18 points in the last two quarters. SMU attempted to rally early in the fourth quarter, but ultimately, their efforts fell short.

Mack had a double-double on the night finishing with 18 points, 11 rebounds and six blocks. Ja’Mee Asberry added 14 points despite having five turnovers, and Brittany Reeves scored 11 points.

Rhyle McKinney led SMU in scoring with 13 points despite shooting 3 for 12. White poured in 12 points while BriShonne Tollie nearly had a double-double with 10 points and nine rebounds.

SMU showed many signs of improvement since the start of the season with solid three-point shooting and offensive rebounding that kept them in the game. However, Oklahoma State dominated the scoring in the paint for the majority of the contest.

“I’m absolutely pleased with the direction we’re going in, but you know every coach and team wants to get a win,” head coach Travis Mays said. “I think we got better with the turnovers, but we got dominated in the paint tonight, and we got to do a better job defensively.”

The three freshmen for SMU each saw playing time tonight with McKinney getting her second career start while Tamia Jones and Jayla Brooks provided key minutes off the bench. Despite heavy depth at the guard position, Mays showed a lot of trust in the young players even putting them on the court together for parts of the game.

“I had to make some tough decisions this week about some things that we wanted to do moving forward,” Mays said. “Hopefully, it has the attention of our squad, but I thought our players that we put in the game tonight were ready.”

This marks the second loss for SMU on the road against a Big 12 opponent this year. It has been a rough start for the Mustangs who have been forced to play a tougher nonconference schedule than they would have in a non-pandemic season.

“I like the way the schedule is,” Mays said. “Some people think I scheduled too many tough teams, but I see our players growing, and hopefully, that will pay some dividends down the road.”

The team has a quick turnaround as they face Arkansas, who is ranked No. 13 in the country, to Moody Coliseum on Wednesday at 7 p.m.

“I think we got a lot of room to improve,” Mays said. “I think when we get in and watch film tomorrow that they’re going to be encouraged by some of the things that we’ve done here tonight and some things hopefully we can improve on.”