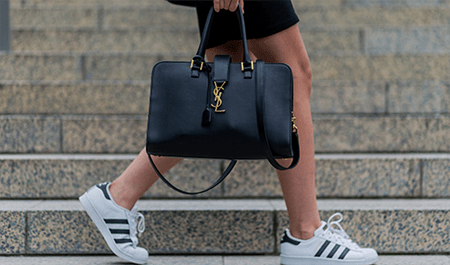 In one of the most widely quoted songs of the 20th century, Bob Dylan sings, “the times, they are a-changing.” Dylan’s words echo today in the stormy landscape of footwear on the Hilltop. It wasn’t long ago that white Converse, or if you were slightly more on the edgy side, white Vans, were the staple of a fashionable SMU lady’s outfit. The classic, gray New Balance briefly threatened the white Converse look but forced nothing more than a period of uncertainty.

What emerged from that period of fashion anxiety was unpredictable: the Adidas Superstar. Take a look around, and you’ll see that new resident footwear is the classic Adidas look. Some are willing to challenge this newly established social norm with the slightly different “Stan Smith” model – but that’s a more cowardly move than it would have been to wear aforementioned white Vans during the reign of Converse. Adidas Superstars have taken over, but “the times they are a-changing” even for their chokehold on the choice of shoe for SMU students.

So, naturally, this induces the question: what’s next? What replaces the Superstar will have to stay true to the retro trend while synthesizing an athletic, casual look. All things considered, the only reasonable option and rightful heir to the throne is the Reebok Omni Pumps, known more casually as “Pumps.” Originally designed to give ball players an edge on the court, the iconic shoe is about to take over Dallas Hall Lawn. The Superstar will probably ride out the spring semester, but as students filter out of campus and return home for the summer, the search for next fall’s look will begin and the genesis of the Pumps at SMU will officially begin.

So if you want to get ahead of the curve – get yourself a pair of Pumps.