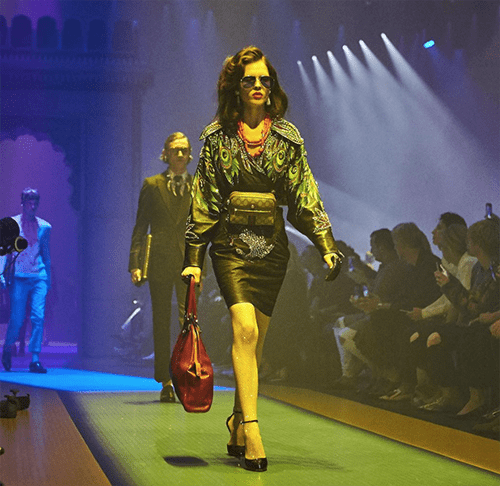 Each city where fashion weeks take place has a different personality. New York is known to have more street-style trends. Milan is the runway home of fashion moguls like Versace and Dolce & Gabbana, and it tends to have a grunge and sometimes dark ambiance. London is known to be more preppy and colorful; the city is the runway home to brands such as Burberry and Erdem. Paris is known to host the elegant, extravagant and haute couture brands like the ever-so-coveted Chanel. But before we officially say goodbye to this acclaimed month and delve into PFW, here are the biggest shows of Milan fashion week that took place between Sept. 20 – 25.

Although fashion week is not over yet, I daresay that this was one of the biggest fashion shows of the month. Vibrant colors, brocade patterns among other bold patterns including Marilyn Monroe and Vogue, leather, flowing dresses, bold cuts, voluminous skirts, form-fitting silhouettes, logo tees, fanny packs — the collection was truly a dream and homage to the trends of past decades. This year was the 20th anniversary of Gianni Versace’s death in 1997— calling for a collection of spectacular proportions. The collection contains beautiful patterns and silhouettes and takes viewers through time, but the ending was the most memorable part of the show. Donatella Versace closed the show by walking out with supermodels, Cindy Crawford, Claudia Schiffer, Helena Christensen, Naomi Campbell and Carla Bruni, as if saying the past is as relevant to the future as it is to the present.

Dolce & Gabbana never fails to incorporate bright, warm colors. This year, its collection played on the idea of the Queen of Hearts. Large playing cards covered the backdrop of the runway—they were even used as print patterns on some silhouettes. Some of the most notable aspects of the show, aside from the extravagant runway, were its extravagant accessories. Crowns, flowers, fringe-filled sunglasses, even playing-card sunglasses adorned models as they walked up and down the runway. The collection shows that fashion should be fun, like playing dress-up for the first time.

While D&G and Versace opted for more colorful, bold and distinctive patterns and silhouettes, Gucci included darker colors and had a somewhat futuristic feel in its show. The runway appeared to be a blue-lit floor with blue lights hitting the models and clothes as they walked by—imagine people alighting a spaceship in ever-so coveted clothes and accessories. Trends include big shoulders (think ’80s shoulders) oversized coats and fanny packs that wrap around the whole outfit, fur accented wrists and arms, T-shirts under sequenced, thin-strapped dresses and unlimited mixtures of patterns, colors and fabrics. As Cady Heron once said, “the limit does not exist.”