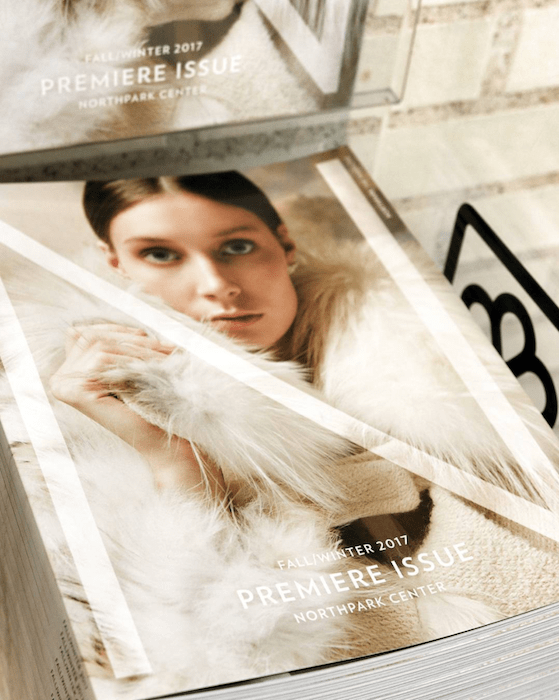 NorthPark Center isn’t your regular, run-of-the-mill mall. From high-end stores, including David Yurman, Tiffany & Co. and Dallas’ very own Neiman Marcus to art pieces by Andy Warhol, Frank Stella and Joel Shapiro to various events hosted by the Center throughout the year such as the coveted ‘Trains at NorthPark,’ the mall is more than a typical shopping area.

According to its website, NorthPark Center opened in 1965 with only four stores: Neiman Marcus, Woolworths, Titche-Goettinger and JCPenney. The Center has since grown tremendously; numerous stores, restaurants, notable architecture and art pieces have made it the go-to place for all things shopping and lifestyle. To further distinguish itself from regular malls and to highlight the Center’s love of all things fashion, NorthPark Center debuted its first-ever magazine NorthPark The Magazine.

The magazine highlights new stores, trends, travel, style, beauty, art, dining—it’s made for the Dallasite who wishes to check out all the new happenings or the visitor who wishes to know what there is to explore in Dallas.

“Northpark celebrates the power of art and the beauty of fashion,” Nancy A. Nasher, NorthPark Center president and owner, wrote in the magazine’s opening note.

With full-on spreads showing off the most coveted collections at Burberry, Roberto Cavalli and a newer addition John Varvatos along with beautiful, intricate jewelry of BVLGARI, David Yurman and Tiffany & Co. in addition to an article on one of NorthPark Center’s restaurants, The Theadore, and an interview with the Dallas Museum of Art’s Eugene McDermotte Director Agustín Arteaga, this magazine is an extension and inside look of what NorthPark Center has to offer.

Pick up a copy of NorthPark The Magazine at kiosks around the Center and see for yourself ‘The Art of Shopping.’