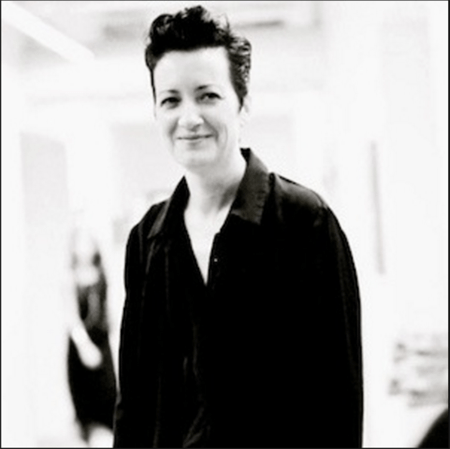 As Theis sits down in the egg-shaped chair, the sun beams through the window. On one side of the room is an exposed brick wall lined with photographs of Wallflower Management’s collection of models; mirroring it is a crisp white wall perfect for serving as a backdrop for impromptu Polaroid head shots. Tucked in the side streets of Deep Ellum, the office is like a New York City hipster’s dream, complete with stainless steel piping that leads visitors upstairs to a loft naturally lit by skylight. The office aesthetic plays perfectly into the Wallflower brand, which is carefully curated by Theis, from the color swatches down to the very last typeface.

Theis always knew she wanted to work in the fashion realm. After spending her childhood glued to the glossy pages of fashion magazines, she went to the University of North Texas determined to one day land a job in which she could create the lustworthy pages that entranced her.

Upon arriving in Dallas, Theis quickly became a devout follower of The Dallas Morning News’ weekly Fashion Dallas section, deciding that the closer she got to the action, the closer she came to landing her dream job. “I kind of stalked them,” Theis said. “I would even go to the hair and makeup stylists that they used and have them cut my hair and all that.”

Her obsession soon paid off. One day, her hairstylist told her of the impending exit of one of the section’s staff writers. “This is your chance,” he encouraged Theis. “This is your opportunity if you want to work for Fashion Dallas.”

During her 21 years at Fashion Dallas, Theis found her passion: styling. “I realized that this was what I loved to do,” Theis said. “It felt fully natural and was what got my endorphins going.”

Around the time that her oldest son started his senior year of high school, Theis left the magazine to pursue a creative career path that allowed her to focus more on the work she loved. She landed at Page Parkes Management, where she met Brenda Gomez. The two quickly bonded over the fact that they had both been hired by the agency to implement change, to which the veteran employees seemed to be resistant.

After leaving Page Parkes, Theis and Gomez started talking about creating their own modeling agency, drawing from their experience with fashion, model management and styling. In 2009, their talks became a reality and Wallflower Management was born.

“We started out with the concept of being a boutique agency and focused on really strong imaging, which hadn’t really been done before,” Theis said. She chose the name because it perfectly described the unique look of models, which translates into the world of high fashion, but not always the halls of high school.

“They’re not the pretty ones,” Theis said. “They are usually skinny and tall and awkward in high school, and they are always taller than the boys, so they often don’t get asked to dances.”

Approaching nine years old in July, the gamble has certainly paid off. The agency’s unique-looking Texas natives are breaking out of the Lone Star State and taking on the big leagues. With models featured in the pages of Vogue and dominating international Prada and Calvin Klein campaigns, Wallflower has found its niche in the market and continues to dominate the competitive landscape.

While the agency and Theis continue to earn a reputation among top agencies and high-fashion clients, it is impossible to match the amount of respect that Theis has earned from colleagues in the Dallas market.

“Tammy is the ultimate veteran,” PaperCity Magazine’s editor-in-chief Christina Geyer said. “She is one of the few people in this business that understands all aspects of modeling, pulling clothes and styling.”

Those who work with her and constantly see her in action know that Theis is a force to be reckoned with.

“Tammy really likes pushing the limits for our models and the way that she images them,” Wallflower model manager Meghan Malanio said. “We are going to stand out and she is proud of that. We all are.”

It is not just her seasoned expertise that makes Theis thrive in the market, but also the way she mothers her burgeoning talent. “She cares about the models,” Geyer says.

“She cares about fostering careers. It is not just about the big agency.”

“She is kind of like a mom,” Malanio said. “She is willing to go above and beyond to help these people become successful and get to where they want to be in the cutthroat model world.”

For some employees, Theis’ influence goes beyond work ethic.

“Since working for Tammy, I’ve become more confident and believe more in myself,” Wallflower creative assistant Courtney Laddimore said. “I think that is something that she not only teaches all of her staff, but teaches all of the models too – the idea that you can be cool in your own skin.”

Despite the success Theis has found, she refuses to get caught up in a world that thrives on the superficial. She still finds time to indulge in her guilty pleasures – namely Trader Joe’s French vanilla bean ice cream – and attributes much of her success to her high school honors English teacher, Mrs. Reem, for giving her the confidence in her writing that led her to Fashion Dallas and her career.

When she is not dominating the model management world, you can find her curled up on her couch with her “pitbull something” rescue dog Carl and reading up on the latest in the industry that never sleeps.