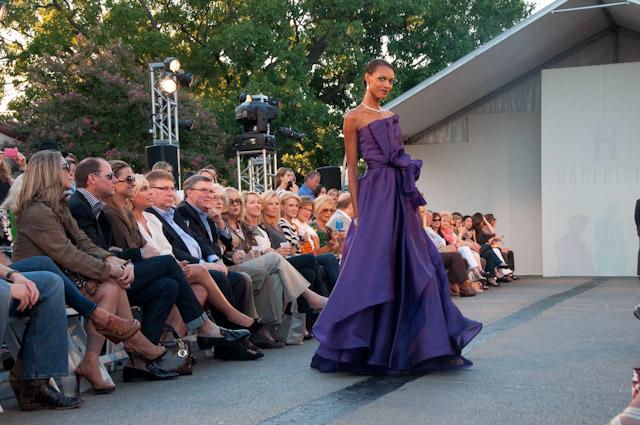 FNO is a global event that celebrates all things fashion and serves as the start of New York Fashion Week. It was started in 2008 by Anna Wintour of Vogue, the Council of Fashion Designers of America (CDFA), NYC & Company, and Mayor of New York City Michael Bloomberg to boost interest in the industry after the economic downturn.

Three years later, FNO was still going strong. And the event supported more than just retailers; a percentage of the sales of an exclusive black, white and red FNO T-shirt went to the New York AIDS Fund.

Here in Dallas, there was no shortage of stylish happenings. Almost every store in town kept their doors open late on Thursday night and presented guests with a myriad of runway shows, styling events, sweet treats, fabulous DJs and even more fabulous clothes.

Galleria Dallas had the catwalk lined up, the music bumping and the champagne chilled. A constant stream of over forty models donning the hottest fall fashions strutted down the quarter-mile-long runway – the longest in North America. The show offered smooth convenience for shoppers, who could view the looks and then purchase them directly in the stores. For those interested in modeling more than shopping, they could get their 15 minutes of fame after the show on the open runway. Dallas philanthropic group The Fashionistas provided FNO-themed miniature bottles of champagne and complimentary beauty tips from cosmetic giant Sephora in their glamorous lounge. Fashion Group International of Dallas had DJ Brandon Olds spinning the latest beats. Even the beloved Galleria ice rink joined in on the fun with a light fashioned with the Fashion’s Night Out logo that shone down on the ice. Stores housed in the mall welcomed guests with discounts, music and giveaways – including Juicy Couture, Michael Kors, Louis Vuitton and Saks Fifth Avenue.

Forty Five Ten, an established designer boutique on McKinney, flew in Cameron Silver to host their fete. Silver is the owner of Decades, a world-renowned vintage shop and archive in Los Angeles. His impressive clientele includes Rachel Zoe and Nicole Richie, who love his unique, highly-edited collection. Silver brought a load of his best pieces and set up a pop-up Decades inside Forty Five Ten available for guests to purchase without a trip to L.A. Treasurers like gold Chanel necklaces and dresses by Prada, Versace, Lanvin

Neiman Marcus, never one to disappoint, had a plethora of options and activities for their attendees. The first level offered trendy Bordeaux hair feathering, luxurious Jack Black facials and hand massages, hand-rolled cigars by City Cigars and a performance by Tom Petty cover band Petty Theft. One slide up the escalator brought guests to a Lagos trunk show, M Missoni and Red Valentino events, a well-placed photo booth, sketches by the Art Institute of Dallas, a lipstick fortuneteller and a fashion caricature artist. The adventure continued on the third level with the main event of the evening. Dallas bloggers Amber Venz (SMU aluma, VENZedits.com), Krystal Schlegel (SMU senior, krystal-schlegel.blogspot.com), and Bradley Agather and Alison Gross (luellajune.com) hosted and styled a chic runway show with fabulous fall looks. As models walked down the runway, the bloggers commented on their top picks – topping off almost every ensemble with Audrey Hepburn-inspired cat eye sunglasses. Several looks garnered applause from the audience. Towards the end of the show, a glittering Marchesa cocktail dress covered in silver sequins was styled by Schlegel and immediately became a crowd favorite. The cast of Bravo’s “Most Eligible: Dallas” was among the stylish guests who mingled and enjoyed cake pops and cupcakes after the show.

Walking up to the colorful Christian Louboutin boutique in Highland Park Village on the third annual Fashion’s Night Out was sure to be a great start to the evening.

The entry windows held two mannequin heads with very creative hairdos that included a pair of Louboutin pumps to display the collaborative event between Christian Louboutin and Frederic Fekkai.

Inside, guests could experience this collaboration first hand by venturing to the back room to have their hair styled by a professional Frederic Fekkai stylist.

Also in the back room was a polaroid station where guests could pose behind a hanging picture frame with the shoes, their friends and their cocktails.

There was a station near the front window that applied a special line of Christian Louboutin faux eyelashes to the guests who wanted a little extra dazzle on their lids.

Throughout the shoe-lined store, waiters served hors devours that ranged from cotton candy on a stick to fried macoroni balls. They also served two different cocktails, one a grapefruit and cranberry vodka drink, the other a mojito inspired drink .

While the guests mixed and mingled in the brightly colored boutique, they shopped for the famously red-soled shoes which widely ranged in style and shape.

Some favorites from the night were a pair of leopard print ankle boots, some spike-studded loafers and a pair of very sparkly pink pumps. There was certainly a style for everyone.

Highland Park Village was definitely the biggest fashion block party in town. Two major open-air fashion shows started and ended the festivities in the parking lot next to the Village Theater. But this was no black tar affair – producer Jan Strimple and her team constructed an incredible white runway that sat high above the crowd, complete with lights and a bumping sound system, featuring designs by Vince, Billy Reid, Trina Turk, Tory Burch and more.