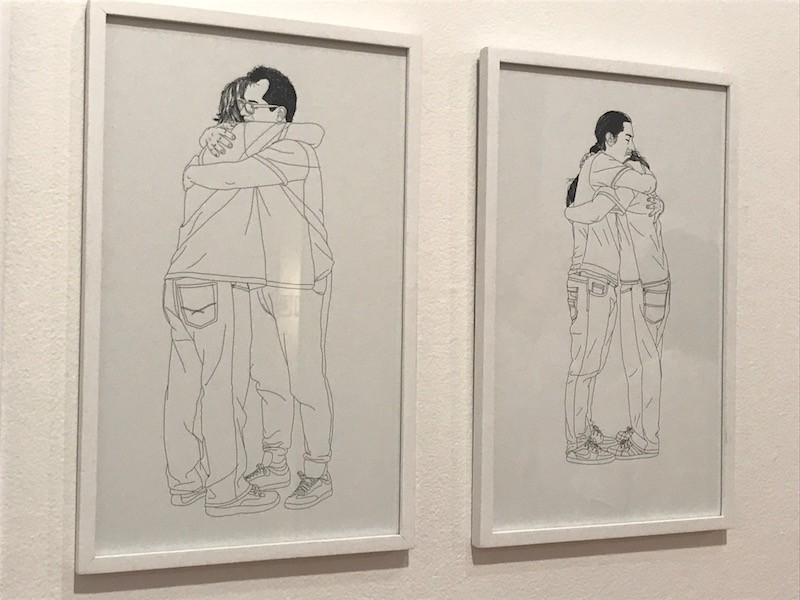 Editor’s note 9/11: This story has been edited throughout.

About 50 members of the SMU community chose to skip the Boulevard festivities this Saturday to attend the opening of the art exhibition Acts of Aggression, hosted in Hughes-Trigg’s Pollock Gallery.

The exhibition features the work of 11 young Guatemalan artists who created pieces that comment on personal, political, and social acts of violence that they have experienced. As visitors entered the gallery, they encountered various forms of media, including film, sculpture, soundscape, and paintings.

Current chair of the SMU art division, Jay Sullivan, believes that this exhibit creates a lens into the tension and aggression present in the wake of a 36 year Guatemalan civil war that peaked in the ’80s.

“As I say to my class, art reveals both things that are transparent, but it also reveals things that are opaque,” Sullivan said. “Things that we can’t somehow see behind, and this show and this work is very much in that vein.”

Laura A.L. Wellen, the exhibition’s curator, guided viewers through the tour, revealing insights into the complex message that the gallery presents. She paused in front of a worn and tattered canvas with a depiction of Houston. The saddening relevance of this image showing flooding that occurred some two years before caused viewers to pause and contemplate with somber expressions.

“These are works that are relevant to Guatemala,” Wellen said. “But also have a relevance to other places as well, because obviously catastrophe is not something that only occurs in third-world countries.”

Wellen was emphatic that viewers not dissociate themselves from the artist’s experiences, but instead draw connections between the pieces and their own communities.

“When these events happen, when institutions fail, when natural disasters occur, how do you respond?” Wellen said. “His is a narrative about a kind of coping with experiences.”

One of the most thought provoking pieces in the gallery is the title work of the exhibition, Acts of Aggression by Mario Santizo. It is a series of digital drawings depicting the artist hugging other Guatemalan artists, many of whom are featured in the exhibition.

Angie Reisch, a senior studio art major who has been attending exhibitions at the Pollock for three years, was particularly intrigued by Santizo’s work.

“I think that the dichotomy, of thinking of the act of hugging as a type of aggression is interesting, because you can also see that as an act of connection,” Reisch said. “The images are so realistic but there is this kind of graphic quality to them, there’s definitely a lot of different layers to it.”

Acts of Aggression will be on display in the Pollock Gallery until Oct. 14.