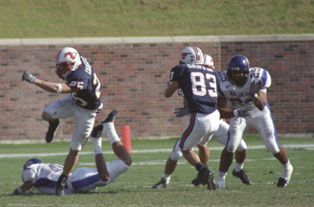 The Mustang offense was able to move the ball consistently and when the game came down to it, Cardwell made a special teams play that UTEP would not have time to counter.

“Cody was close to going all the way on a couple of returns in the first half and he broke one at the best time,” said Mustang head coach Phil Bennett. “It was a big-time play and I am so proud of him.”

SMU and UTEP traded scores for much of the game. The Miners jumped on top early with a 71-yard touchdown pass from Omar Duarte to Sherman Austin. SMU responded early in the second quarter when quarterback Richard Bartel connected with tight end John Hampton from 25 yards out. The Mustangs only needed 28 yards for the score, taking advantage of great field position.

UTEP scored the last touchdown of the half with 18 seconds left in the second quarter. SMU surrendered a 21-14 lead to the Miners at the break.

“I told our kids that I believed in them and that we were fixin’ to take the lead fast in the second half,” coach Bennett said.

True to his bold prediction, SMU posted two quick touchdowns in the third quarter and took a 28-21 lead.

UTEP scored with five minutes left in the third quarter, tying the game at 28. With 10:10 left in the fourth quarter, Bartel led the offense on a 6 play, 64-yard drive that resulted in a 14-yard touchdown pass to Derron Brown.

Duarte and the Miners answered quickly. Tied again at 35-35, the two teams exchanged punts before Cardwell stepped up to make the play to bury the Miners hopes.

“My adrenaline was pumping,” Cardwell said. “I don’t even remember what was going on. All I do know is that my punt return team blockers were opening up holes all day.”

UTEP’s final attempt to send the game into overtime fell short in the endzone and SMU celebrated its second victory of Bennett’s inaugural season.

UTEP has had trouble covering punts all season. Cardwell exploited their vulnerability for 169 yards on six returns.

“We have no excuses. Inconsistency is a killer and we have been inconsistent in every area of special teams,” UTEP head coach Gary Nord said.

Bartel completed 16 of 27 passes for 238 yards with three scoring passes. Hampton caught five passes for a career-best 124 yards. Kincade finished with 88 yards on 24 carries. Cardwell set a school and Sun Bowl record with his 169 return yards.

Cardwell was named the WAC special teams player of the week for his performance.

“Cody was a difference-maker in the game and he is very deserving of the honor,” Bennett said.

SMU will close the 2002 season Saturday at home against Tulsa at 2 p.m.