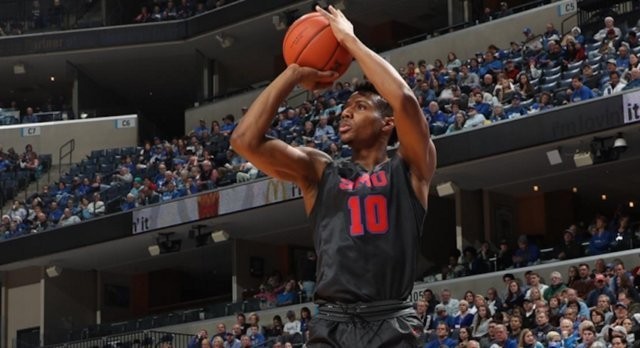 For the second straight season, SMU was greeted with a winter storm upon arriving in Philadelphia to play Temple.

The similarities between the two trips ended there. In fact, they were close to opposite.

This year, there was no Temple victory over ranked SMU, no 7-for-7 from 3-point land performance by a Temple player, no SMU defense that gave up 89 points.

Semi Ojeleye led all scorers with 30 points, a career-high and his ninth 20-point game of the season. Sterling Brown, a game after scoring a career-high 27, posted 10 points and nine rebounds. Ben Moore scored just nine points, but grabbed 11 rebounds.

SMU’s offense, outside of Ojeleye, didn’t have a great night. The Mustangs shot 32 percent in the first half and scored just 28 in the half – with nine turnovers of their own – but still held a 10-point lead at the break. They shot 38 percent for the game. Ojeleye was the only SMU player to make a 3-pointer.

The SMU lead ballooned to 15 points early in the second half, but Temple prevented SMU from building on it until the final minutes. The Owls committed just one turnover in the first 11 minutes of the half. Quinton Rose had a layup and a dunk in transition to shrink the SMU lead to single-digits with 14:32 to go. A 3-pointer each from Daniel Dingle, former walk-on Mike Robbins and Shizz Alston answered SMU baskets that briefly re-captured the double-digit lead.

Ojeleye, more often than not, provided an answer. When a pair of Robbins free throws with 7:54 left trimmed SMU’s lead to six, he hit a contested 3-pointer on the other end. After Obi Enechionyia 3-pointer 50 seconds later cut SMU’s lead to seven, Ojeleye made a tough jumper.

If SMU wanted to test its toughness before Sunday’s home date with No. 11 Cincinnati, the unbeaten conference leader, it passed. It played Thursday’s game with just six scholarship players, as Dashawn McDowell sat out with concussion symptoms.